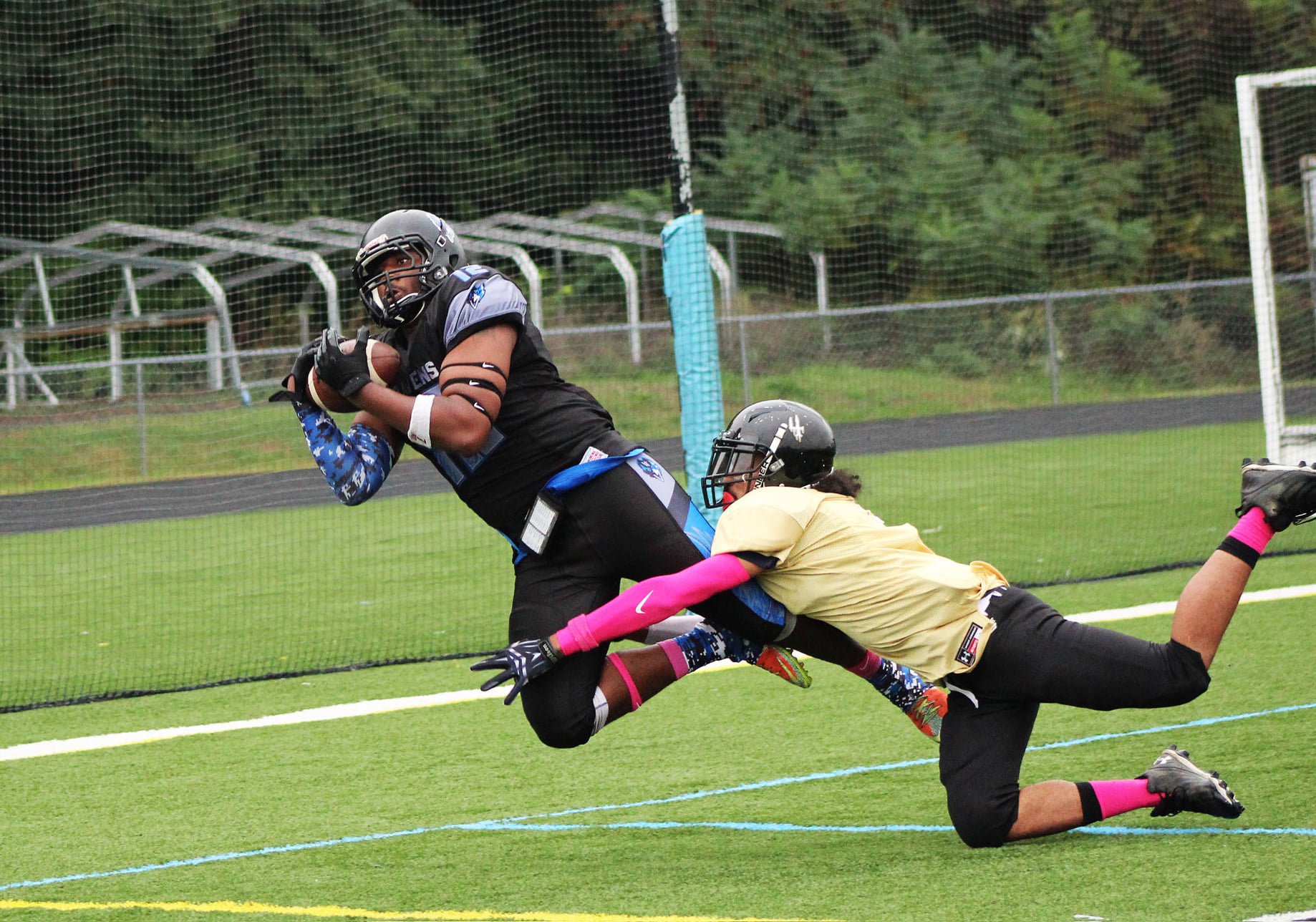 The Vermont Ravens defeated the Connecticut Reapers Sunday 28 to 0 and punched their ticket to the Championship game against the Hartford Colts this coming Saturday, Oct. 9th in Hartford Connecticut. Time and location TBD. Raven offensive coordinator Chris West did a good job of keeping the Reapers off balance with the combination of QB #11 Jack Leclerc’s passing for two touchdowns and timely scrambling to the ground and pound attack of running back #3 Akeem Williams who ran for 103 yards on 25 carries while scoring twice.

To complement the balanced offense, defensive coordinator Shawn Harvey mixed up the coverages and executed timely line stunts perfectly disrupting the Reaper offense and pitching a shut-out. The game started off with each team failing to move the ball well and both had promising drives stopped by turnovers. Finally with time running down in the first quarter Leclerc found an open receiver #5 Austin Mayo in the flats off the right side and completed the touchdown pass of 10 yards breaking the 0-0 tie.

K/P/LB/FB #24 Drew Lamb was successful with his point after attempt and with 47 seconds left 1st quarter the score was 7-0 Vermont. In the second quarter Vermont’s WR/LB #12 Kenny Phillips II took over while playing linebacker on defense leapt high coming down with the interception and taking off down the right sideline returning the pick for 44 yards deep into Reaper territory before being driven out of bounds. Three plays later Leclerc lofted a nice pass into the arms of an extended Phillips coming down in the back left-side of the end-zone for a 10-yard touchdown reception. Lamb was good again on the point after and the Ravens led 14-0 Along with Phillips interception Vermont’s defense added a couple more in the second quarter when big defensive end #77 Zach Heyer snagged the ball out of the air a few feet from the Reaper QB and rambled for a 14-yard return.

A few minutes later with the Reapers threatening Raven free safety #17 Somer Mackillop saved a touchdown with an end-zone interception and return of 19 yards keeping the shut-out, and at the half, the score was 14-0 Vermont. Offensively for the Ravens the 3rd quarter had some fireworks in the form of William’s and the offensive line dominating while taking time off the clock. The fleet running back found room to run and with the line blowing the Reapers off the ball Vermont would pound the ball scoring twice. The first a 5-yard burst up the middle for the score and the two-point conversion pass from Leclerc to Phillips at the 9:22 mark made the score 22-0 Ravens.

Again, Vermont capitalized on turnovers as Raven defensive end #29 Alex Dickinson pounced on a loose ball caused by LB #51 George Campbell for a fumble recovery and Williams again would gain large chunks of yardage getting down to the Reaper 3-yard line. Williams got the call again and again he successfully scored this time a run off the left guard. The two-point conversion rushing attempt of Williams was no good and at the 57 second mark 3rd quarter the score was 28-0.

The fourth quarter had no more scoring with the Raven defense coming up with the needed stops to protect the shut-out and preserve Head Coach Bob Lambs first play-off victory as the Ravens first year coach. Defensive back #1 Matthew Gomes came up with the last interception of the day at the 2:14 mark left 4th quarter on the Raven 5 yard line.

WR/DB #17 Somer Mackillop had 3 catches for 37 yards and on defense he had 4 tackles and 1 interception, in the end-zone, and returned it 18 yards.

LB #51 George Campbell had 6 tackles, 4 of them solo, with a forced fumble.

DB/WR #1 Matthew Gomes had 5 tackles, 4 of them solo and 1 interception, no return.

WR #19 Matt Lumkes had a touchdown saving tackle after a ball he was going up for was intercepted and returned.