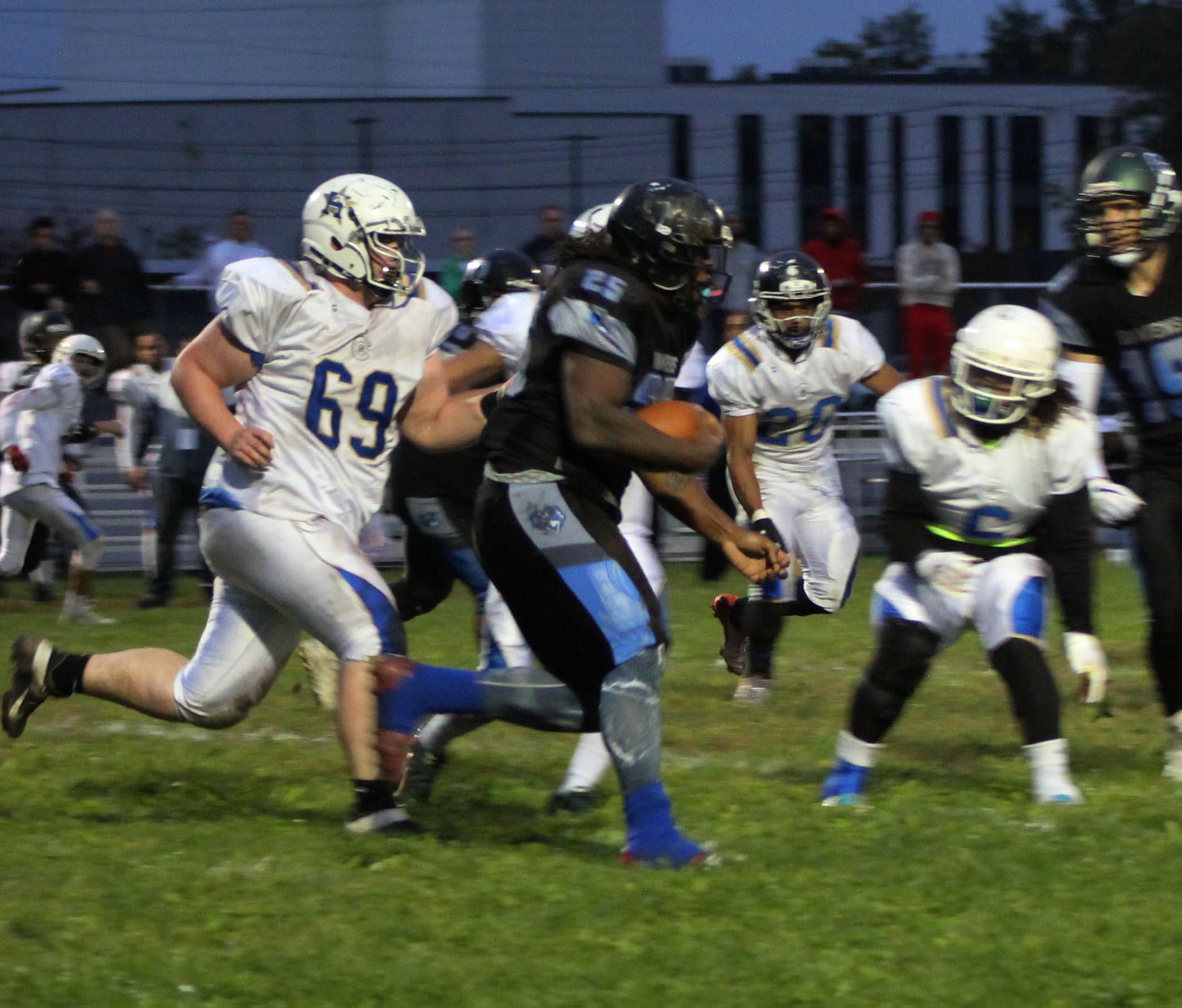 The Ravens traveled to Hartford for the Championship game of the single A division of the New England Football League Saturday. Coming off a huge first round play-off win over the Reapers, winning going away 28-0, Vermont has been riding high and getting better as the year progressed and seemed to be peaking at the right time.

Having lost the first meeting with the Colts early on, Vermont found it’s groove afterward and while losing one more game during the season they did beat Hartford the last game in overtime 32-26 at home in South Burlington finishing the season 6-2 while Hartford won the divisions first seed at 7-1.

This with the first-round play-off game win over the Reapers and advancing to the Championship game sets up the rubber match between the two teams as the tie breaker, and winner of the trophy for 2021.

The first quarter showed both teams moving the ball but coming up short scoring any points.  The combo of RB/DB #3 Akeem Williams and RB/LB #25 De-Eric O'neal made great strides in moving the ball for the Ravens but, showed zero points as the quarter closed with both defenses making stops and forcing punts. Not until 7:54 left second quarter was the deadlock broken with Hartford QB #14 Ben Ambro finding crossing wide receiver #81 Devon Hernandez alone in the end-zone for the first score of the game.  The two-point conversion run was stopped short, and the score was 6-0 Hartford.  A swarming attacking Colt defense made the going tough for Leclerc as he was running for cover avoiding the Hartford rush and was sacked a couple times and threw 2 interceptions.

The defender doing most of the damage from a defensive linemen position was #21 William Deleon who repeatedly pressured Leclerc during the game.  Leclerc did suffer 3 sacks for 10 yards with 2 sacks recorded by Deleon,The Vermont quarterback used his legs to avoid the rush as much as he could and was able to buy time completing passes to WR/LB #12 Kenny Phillips II and WR/FS #17 Somer Mackillop keeping the Colt offense on the sidelines.  The Ravens were only able to move the ball between the 20’s most of the game and did not score as at the half the score remained 6-0 Hartford.

The score remained that until the Colts went on a nice drive moving the ball down the field with the big play a 25-yard run up the middle by RB #24 Henry Meneses moving the team down to the 22-yard line of the Ravens. From there Ambro rolled right and found Colt WR/DB #8 Paris McDougald Sr. down the right sideline near the goal line and hitting him in stride scored what turned out to be the game winner for Hartford. The two-point conversion pass attempt was incomplete, and the score was 12-0 Colts, 12:10 left 4th quarter.

Coach Lamb and offensive coordinator Chris West settled the offense down and with plenty of time on the clock Leclerc moved the team downfield hitting Phillips for 15 yards. From there Leclerc looked right and came back left finding Phillips alone at the 2-yard line where after catching the ball Phillips fell forward into the end-zone scoring the TD from 25 yards out.

The point after attempt was good by K/P/FB/LB #24 Drew Lamb and the score was 12-7 6:33 left in regulation.Vermont stopped Hartford and forced a punt setting up the final drive of the night.  Leclerc again under pressure got rid of it fast this time completing a slant pass to TE/SS #20 Roy Rose who ran for 20 yards before being tackled. The next pass play saw Leclerc find an open Phillips and completing the pass brought Vermont down to the Colt 10-yard line after a completion of 33 yards. On the next play Leclerc facing an all-out blitz rolled left and before being tackled let go a high pass to Mackillop who was unfortunately not able to make the catch because DB/WR #7 Qasian Banks was there making a great play and coming down with the ball for an interception.

With 1:00 left in regulation the Colts took a couple knees to run out the clock and secured their NEFL Championship victory.

Vermont finished the season second with a final record of 7-3 while the Colts win the Championship and finish with a record of 9-1.

Pics by Linda Salm on www.vermontravens.com