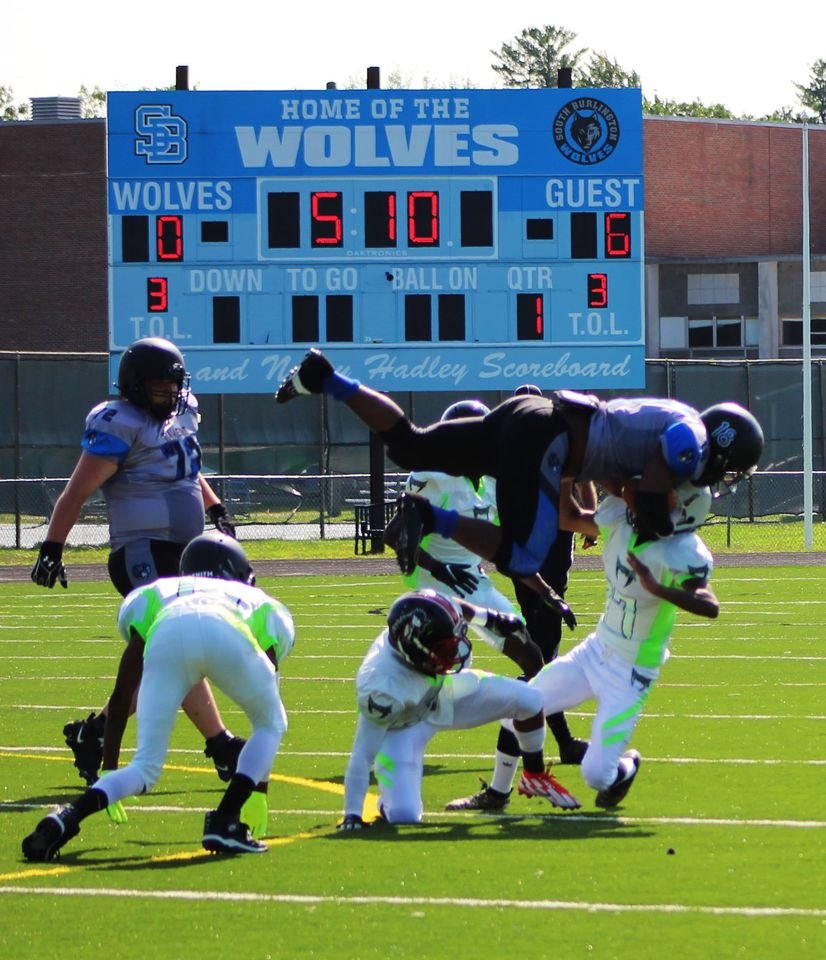 A late arriving Venom team took not much time warming up and proceeded to score on their first possession off from speedy #23 running back Dennis Coleman’s 97-yard jaunt down the right sidelines.  The 2-point rushing attempt was no good and the score was Venom 6 Vermont 0 at the 7:58 mark.

Vermont running back #3 Akeem Williams found a nice hole off the left side and sprinted into the end-zone from 3 yards out tying the score 6-6 and with kicker #24 Drew Lamb's PAT good the score was 7-6 with 3:12 to go in the first quarter.  Williams had 63 yards on 10 carries and 1 TD on the day.

The big play in the drive was a Leclerc pass to receiver #5 Austin Mayo who made a diving catch at the 3-yard line for a 28-yard gain.

The first half’s only other score was in the 2nd quarter at the 2:55 mark as Raven QB #11 Jake Leclerc hit receiver #12 Kenny Phillips II just inside the end-zone for the go-ahead touchdown.  The point after attempt by Lamb was wide right and the score held into halftime 13-6 Ravens.

Leclerc did it himself in the third quarter capping a drive with a 3-yard run off the left side and with the touchdown and the ensuing 2-point conversion of Leclerc to fullback Lamb the score was 21-6 Vermont 7:27 third.

Later in the quarter Vermont running back #18 Terrence Tedo Whitney had an incredible run as he broke tackles and steamrolled the opposition all the way to the end-zone from 18 yards out.  He would carry 3 more times on the day accounting for 52 yards, and 13-yard average, to go with his one touchdown.  The PAT attempt by Lamb was wide right and the score was 27-6 2:21 left third quarter.

Vermont’s last touchdown on the day had Leclerc find an open receiver Phillips again for a score this time from 21 yards out.  Phillips would finish with 5 catches for 81 yards and two touchdowns.

New Haven had one drive left in them as time wound down in the game and that was again Dennis Coleman #23 the fleet Venom running back scoring from 48 yards out.  The 2-point conversion attempt failed and the scoring on the day was done.  Vermont let the clock run down and claimed the victory improving to 3-1 on the season.  The Venom slip to 0-4.

Raven quarterback Leclerc finished the day 10-16 for 144 yards and 2 TD’s and 1 INT.  Leclerc also ran for 2 times for 5 yards and scored one touchdown.On defense Raven SS #20 Roy Rose had 6 tackles, 3 of them solo, one sack and two stops in the backfield for negative yards.More stats forthcoming after watching the film.