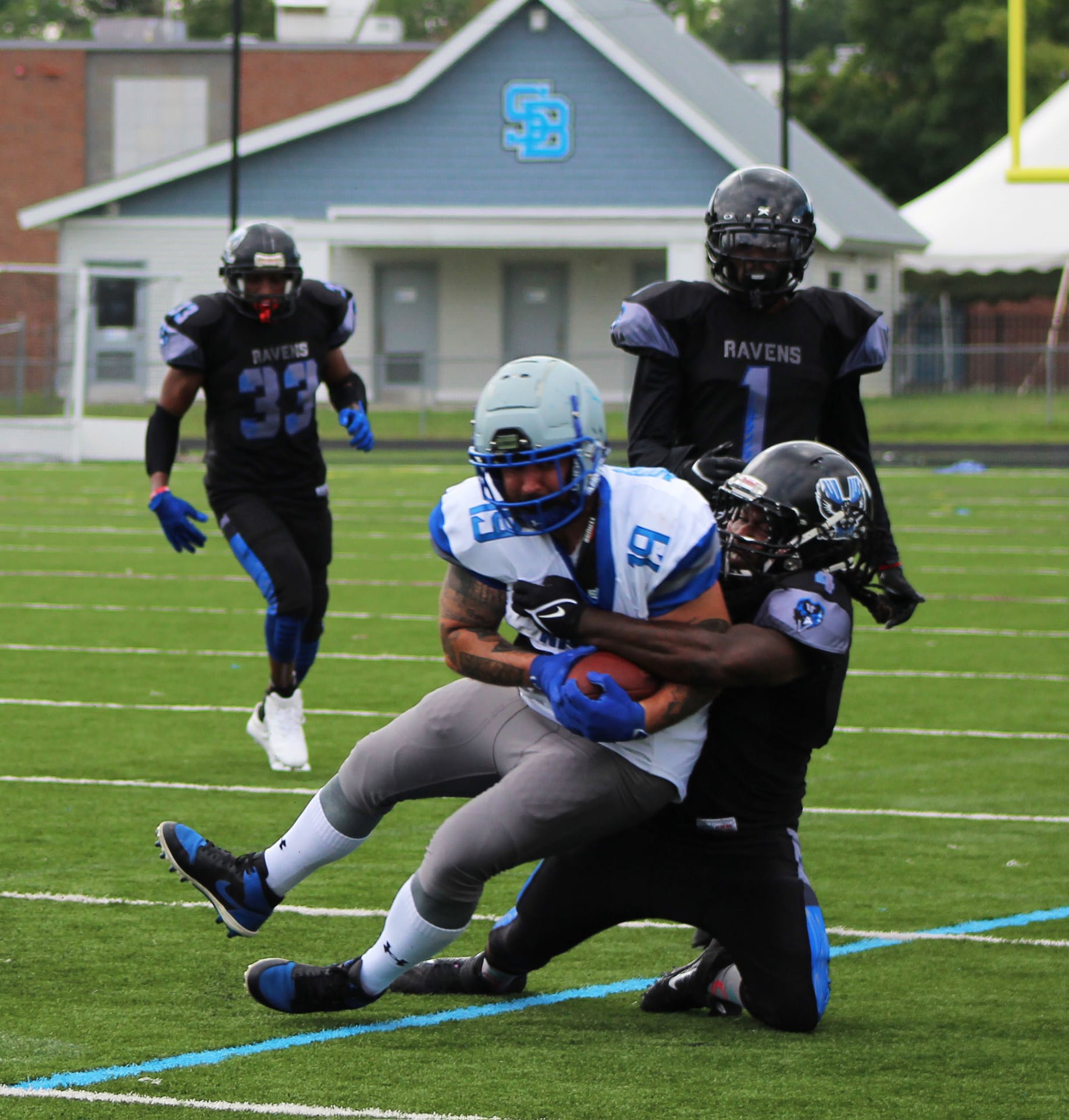 Quarterback #11 Jack Leclerc led an efficient Raven offense completing 9 of 13 passes for 114 yards and 5 touchdowns Sunday afternoon in Vermont’s 49-0 victory over the Riptide.

The game was called at the 9:55 mark of the 4th quarter due to excessive heat. Vermont WR/LB #12 Kenny Phillips II scored twice, the first a nice back of the end zone grab from 21 yards out, and the second a Leclerc shovel pass at the Riptide 10-yard line which saw Phillips cut-back and scored untouched.

On defense Phillips had 3 tackles, 1 of them solo, and 1 sack for a 10 yard loss. Raven WR/LB #14 Clay Torres contributed a 26-yard touchdown as he caught the ball on the left sideline and outran the defensive back beating him to the pilon for the score.

On defense Torres had a pass defensed and 3 tackles, 2 of them solo 1 for a 7 yard loss. Raven receiver #5 Austin Mayo caught a Leclerc bullet pass from 8 yards out, in the end-zone, laying out completing the play sliding on the turf. Mayo also returned a Riptide punt back 30 yards.

Leclerc found tight end #20 Roy Rose in the back of the end-zone running a crossing pattern behind the defender laying out for his one touchdown on the day. Raven running back #3 Akeem Williams had the first score of the game running up the middle right off Rose’s back following him into the end-zone for 6. He also scored a 2-point conversion on a run after Rose’s touchdown. He ran for 57 yards on 5 carries. Williams also had an interception playing defensive back and contributed 5 tackles, 3 of them solo.

Vermont’s defense got into the scoring act when safety #33 Norman Cole grabbed an errant Riptide pass and found running room down the left side completing the pick-6 from 21 yards out.

Cole also had 2 tackles, one of them solo, for a 5 yard loss. Vermont kicker #24 Drew Lamb was 5-5 on point after attempts. Linebacker #51 George Campbell had an interception and return of 15 yards, and had 5 tackles, 1 of them solo. RB/LB Linebacker #18 Terrence Tedo Whitney had a blocked punt and recovery while gaining 39 yards on 3 carries on the afternoon.

He also had a pass defensed and 3 tackles, 2 of them solo and 1 sack 10 yard loss. Vermont’s defensive line had a huge day disrupting anything the Riptide offense tried as pressure on the quarterback all day resulted in miscues and blown-up plays.

#50 DT Adolphe Lumumba had a monster day recording 8 tackles, 3 of them solo. DT