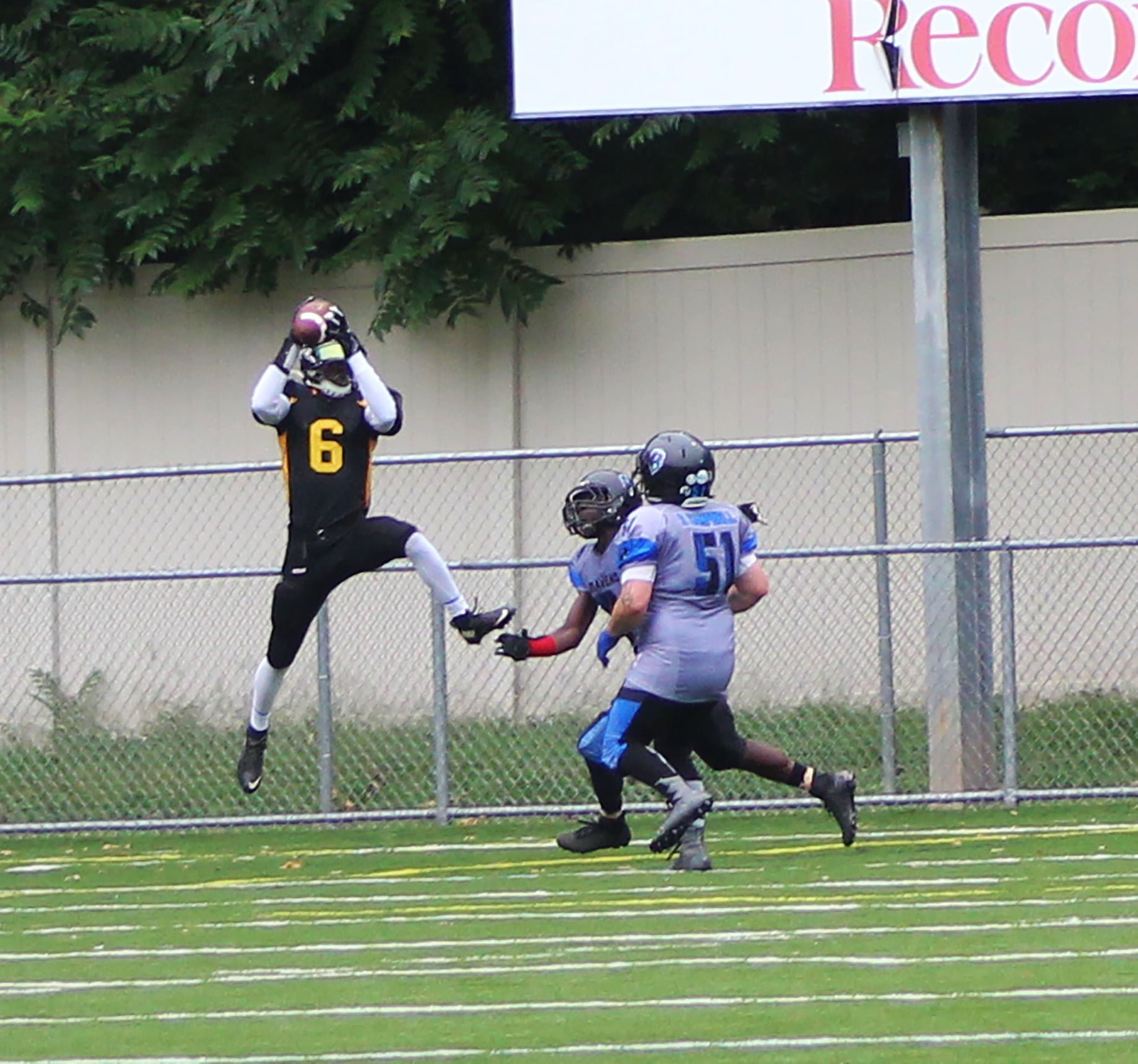 As the old saying goes it’s hard to beat a team 3 times in a season and yesterday proved that to be very true. The Ravens traveled to Meriden to play the Reapers again in what was a game to take the place of one that was canceled when a team dropped out of the league.

Give credit for an inspired performance by the Connecticut Reapers as they continue to improve climbing back to .500 at 3-3. On their first series after the Ravens gave the ball up on downs the Reapers drove to the Ravens 34 yard line but failed to pick up the first down. In came K/TE/DE #88 Marcus Cadogan for the 51 yard field goal.

Not since Brian Kemp hit a 57 yard field goal for the Vermont Ice Storm has this reporter witnessed as long a field goal in semi-pro football. He hit it hard on a line that kept rising and having the distance split the uprights for the monster kick and the games initial points going up 3-0, 8:00 left 1st quarter.

While the Ravens failed to move the ball consistently the Reapers would score next as #11 D’yante Howard took the ball around left end, found a seam, and sprinted in from 35 yards out. Cadogan’s PAT attempt was good and the Reapers went up 10-0, 2nd quarter. Scoring one more time before half this time through the air, QB #7 Brandon Garcia found WR/DB #17 Jordan Moosey for a 65 yard touchdown reception that saw Moosey accelerate and beat the Raven secondary to the end-zone.

This time the PAT attempt by Cadogan was low and blocked by the pile created by the Raven defense. 16-0 Reapers and that score held up to the half. Vermont was able to make some head way in the 3rd quarter when taking the hand off from QB Jack Leclerc, RB #3 Akeem Williams motored around the left side receiving a crucial block from #80 TE/DE Alphonso Jacobs in the open field springing Williams for the footrace to the end-zone and the Ravens first score of the game.

Leclerc’s 2-point pass attempt was incomplete and the score was 16-6 Reapers early 3rd quarter. The Reapers would score one more time in the third on a 5 yard touchdown pass from Garcia to Cadogan making it 22-6 Reapers. They went for the 2-point conversion and the pass from Garcia to WR #6 Kjuan Smith was complete 24-6 Reapers. In the fourth Leclerc found an open RB #18 Terrence Whitney in the flats and making one defender miss, went the distance for a 39 yard touchdown reception.

Leclerc suffered a sack by the Reapers defense and the 2-point conversion was no good. 24-12 Connecticut. The Reapers scored once more as time ran out when RB #19 Alexander Butler burst through the line and rambled in from 24 yards out, 30-12 Reapers. Fittingly to end his outstanding performance on the day, Marcus Cadogan’s extra point attempt was good, capping the day on the Reapers victory.

The Ravens fall to 4-2 on the season and have off until Sept. 18th when they travel to New Haven, Ct. to play the Venom.

WR/DB #1 Matthew Gomes had 1 catch for 16 yards and on defense he had 2 tackles.