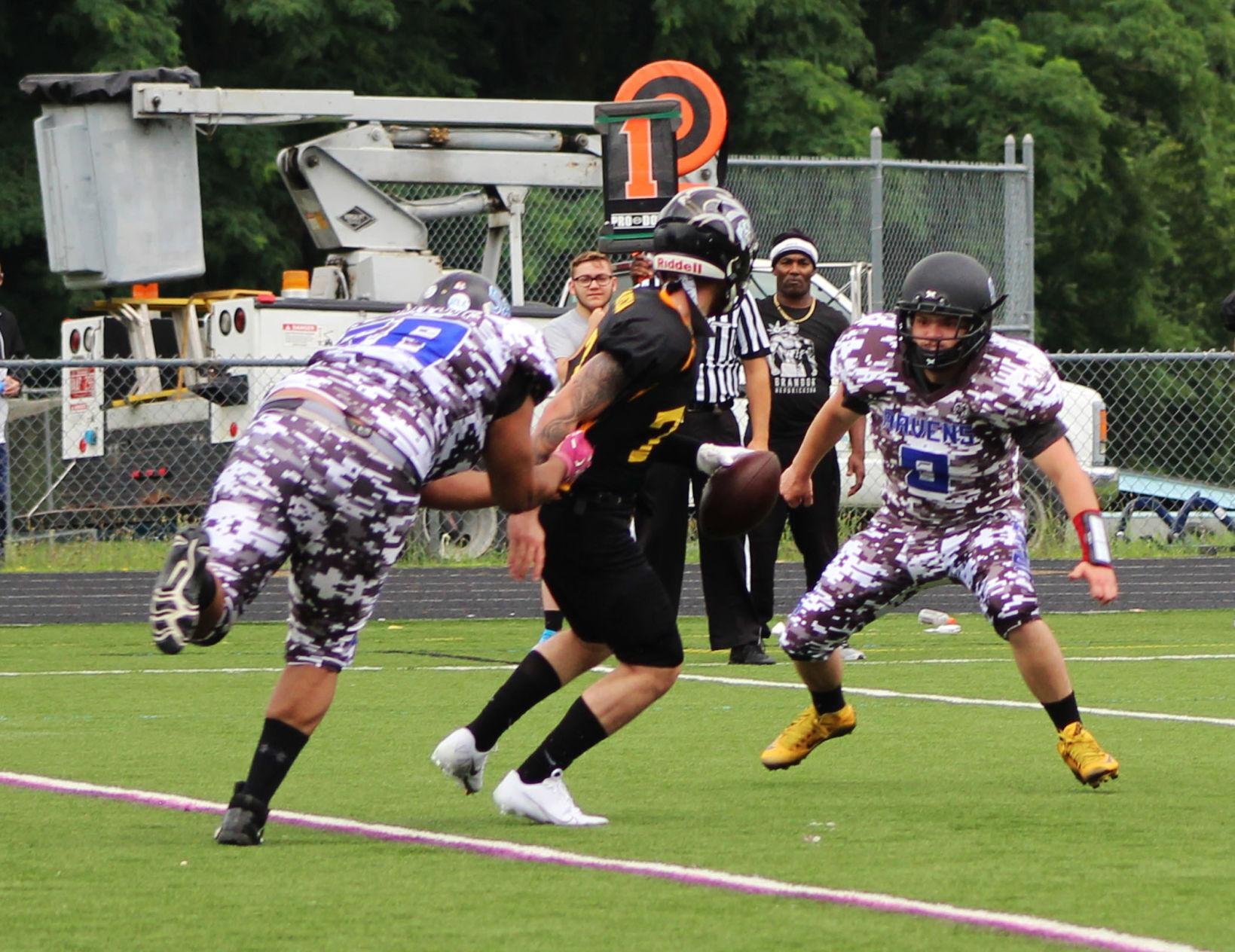 MERIDEN, Conn. — The Vermont Ravens made a big defensive stop when it mattered most to earn a 19-18 victory over the Connecticut Reapers in New England Football League action.

With time running out and the Ravens leading by one point, Connecticut drove to the Vermont 13-yard line. The Reapers lined up to attempt a 30-yard game-winning field goal during the final seconds. The snap was good, but Ravens defensive end Zachery Heyer threw a wrench in the comeback attempt. Heyer leapt through the air and blocked the kick in the nick of time. He wound up catching the ball during the sequence and quickly fell on it before time expired.

Heyer, a St. Albans product and former Vermont Buck, had an outstanding game in the victory while making three tackles defensively and blocking as a tackle on offense.

“This was a total team effort and everyone contributed,” he said. “I’m so proud of this team.”

Vermont head coach Bob Lamb and his assistants worked to keep the team focused during a hot day. The Ravens squeaked out a huge road victory after blowing out the Reapers, 42-0, last year.

Quarterback Jack Leclerc completed 8 of 24 passing attempts in the victory. He piled up 162 passing yards and three touchdowns. He threw one interception and ran the ball three times for 29 yards.

Williams forced a fumble defensively and a clutch tackle late in the game. Teammate Casey Payette recovered a fumble in addition to recording eight tackles and a sack for a loss of 8 yards.

In the first quarter Leclerc found Torres down the left sideline and the two connected on a 56-yard touchdown. The 15-year veteran showed he can still turn on the jets as he ran away from a defender while scoring the first points of the game. Kicker Drew Lamb was good on the extra-point attempt for a 7-0 lead.

On the ensuing kickoff, Reapers standout Kjuan Smith found a lane and burst through the line. He outran everyone on route to an 80-yard touchdown.

Vermont scored the only points of the second quarter, as Leclerc connected to Rose for a 4-yard touchdown. Vermont led 13-6 at halftime.

Connecticut answered in the third quarter, as quarterback Brandon Garcia threw a strike to Smith for his second touchdown. The two-point conversion was incomplete, leaving Vermont with a 13-12 lead.

A back-and-forth final quarter featured a clutch touchdown by the Reapers. A 4-yard scoring run by Keyante Russell combined with a two-point conversion pushed the hosts in front 18-13.

After receiving the kick-off and having good field position at their own 46-yard line, Vermont stuck quickly with a big play. Leclerc hit Williams with a quick pass and Williams did the rest by finding the seam and rambling down to the Reapers 15-yard line before being forced out of bounds.

Leclerc connected to Gomes to bring Vermont to the 6-yard line. On the next play, Rose advanced from the slot position and ran a corner route. Leclerc threw the ball into his outstretched hands for a touchdown. The two-point conversion pass by Leclerc was incomplete, leaving Vermont with a 19-18 lead. Heyer saved his best for last after the Reapers started from their own 16-yard line on the ensuing kickoff.

The Ravens improve to 2-1 while the Reapers drop to 2-2. Vermont will host the New Haven Venom (0-3) at 2 p.m. Sunday at South Burlington High School.