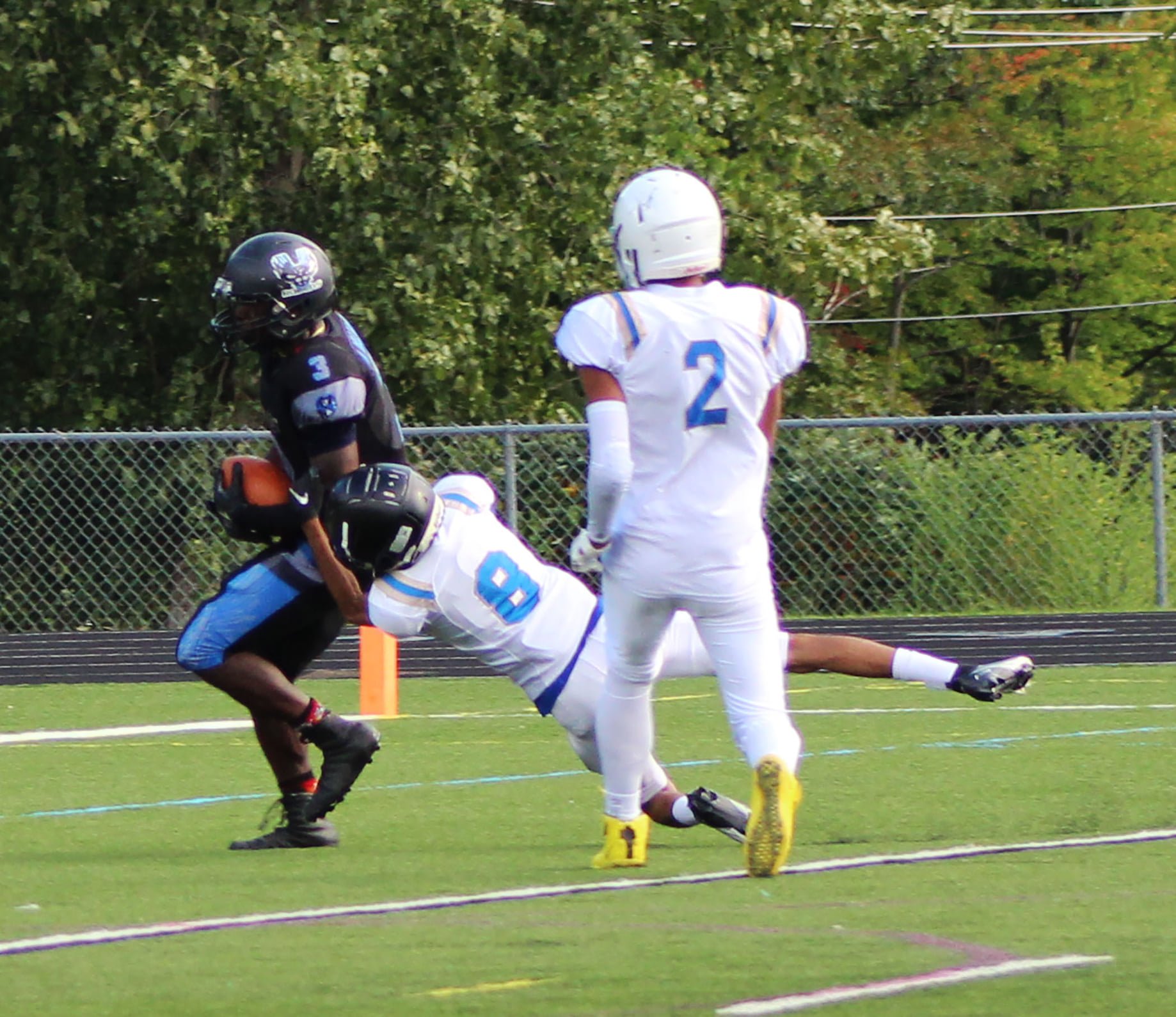 Raven quarterback #11 Jack Leclerc completed 22 of 32 passes for 262 yards and 3 touchdowns and added 1 two-point conversion completion. He also ran 7 times gaining 38 yards on the ground. He did suffer one interception and was sacked 4 times for 17 yards by the aggressive Colt defense.

Leclerc used a pair of Raven receivers to do most of the damage with WR/RB #5 Austin Mayo catching 9 passes for 62 yards and the game winner with 5:52 left in overtime. WR #17 Somer MacKillop added 8 catches for 141 yards and 1 touchdown. WR #12 Kenny Phillips II had 3 catches for 39 yards and 1 two-point conversion. RB #3 Akeem Williams had 1 catch for 18 yards and a touchdown.

The game early on did not give any indication of being the high scoring affair in which it turned out. A scoreless 1st quarter, extended to 13:40 of the 2nd. After a 3 and out by the Raven offense, special teams gave Vermont a lift when #24 Drew Lamb boomed a punt 47 yards pinning Hartford down on their own 1-yard line.

The defense came up big stopping the Colts on downs and forced a punt. Led by a charging DT #56 Lloyd White Jr. and LB #29 Alexander Dickinson (who got his hand on the punt) the Ravens alert #77 Zachary Heyer pounced on the ball in the end-zone for the first score of the game.

The extra point attempt was no good and the score was 6-0 Vermont early 2nd quarter.Hartford’s quarterback #14 had a pretty good day as he and RB #20 connected a couple times for long gains. The first was a 68-yard pass completion that saw him catch it mid-field and out-race everyone to the end-zone for the tying score.

The two-point conversion attempt was no good and the score was 6-6, 30 seconds left 1st half.Vermont was not content in running out the last few seconds of the half. After a nice kick-off return by Williams of 26 yards brought them close to mid-field, Leclerc found Mayo who reached the 23-yard line with 5 seconds left. On the last play of the half, Leclerc rolling left away from pressure, found a crossing Mackillop who caught the ball and receiving a nice block from Mayo that sprung him allowing him to make it to the end-zone where he chose to make a full out leap over a defender landing in the end-zone for the second score for the Ravens.

Both team defenses held tough and the see saw battle went Vermont’s way again this time with a run up the middle of 2 yards by RB #18 T Train. The two-point conversion attempt was incomplete by Leclerc and the score was 26-20 Ravens 2:10 left in regulation.On the ensuing kick-off #2 for the Colts took the kick and deftly avoided the Raven tacklers on-route to his game tying touchdown kick-off return of 65 yards. The following two-point conversion run was stopped short, 26-26 end of regulation.The overtime is a first score wins scenario and it took until the 5:52 mark for Vermont to get the win.

This time Leclerc found Mayo in the front right-hand corner of the end-zone for his 9th catch of the day, the game winner. 32-26 final

DB/WR #17 Somer Mackillop had 7 tackles, 2 solo, and 1 interception with :23 seconds left in regulation.

The Ravens finish the regular season with a 6-2 record and are the 2nd seed for the play-offs. Vermont will host a playoff game next Sunday, Oct. 3 against the Ct. Reapers, 12:30PM kick-off at South Burlington HS.